My number one annoyance with other scent diffusers is that they tend to get turned on and then forgotten about. The diffuser runs indefinitely and the expensive fragrance gets used up way too quickly. Then, when you have some guests coming over and actually want to freshen up the place, the scent is all used up.

The Pura smart diffuser tries to remedy this situation. 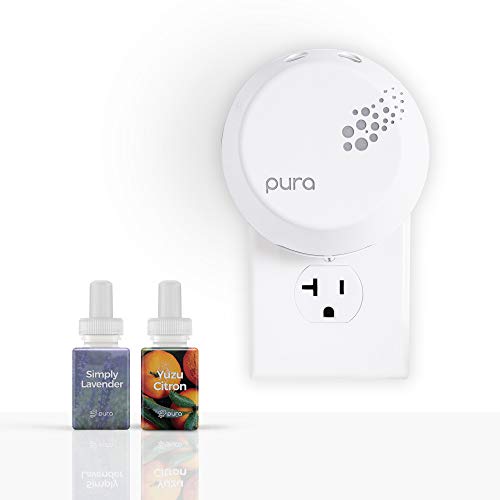 You can use the Pura app to create schedules so that your scent runs only at the times and intensity you want. And, if your scent is running low, the app will send you a notification. Then, you can use the app to easily reorder or to shop Pura’s huge catalog of fragrances.

I’ve been using the Pura for several months and can tell you it works great for adding a subtle but persistent scent to small to medium sized rooms. It boasts a huge variety of high-quality scents from brand names you already know.

However, it seems generous to call the Pura a “smart” device because it lacks integration with any other smart home platforms. That means no voice control, no routines, and no advanced automations. If smart home control is important to you, it’s probably best to look elsewhere. Here’s a list of some other smart diffusers.

But, if you’re just looking to freshen up your place with some awesome fragrances, and be a little less wasteful with those expensive fragrances, the Pura smart diffuser is exactly what you’re looking for.

The scents from Pura are definitely the best thing it has going for it. They’ve partnered with popular candle brands to recreate popular scents for the Pura diffuser.

The Pura website has a huge amount of scents to choose from. They have fragrances from well-known brands, but also fragrances from brands you’ve probably never heard of. In addition, they’re constantly getting new fragrances to keep up with the seasons.

I’ve tried about 10 different fragrances so far, and have yet to be disappointed.

How long do the scents last?

As a general guideline, each vial will last about 110 hours at an intensity level of “5”.

If you run them 8 hours per day, that equates to about two weeks of use for a single vial.

The app keeps track of the hours and the intensity each scent bottle has been running. It uses that information to guess how much scent is left. It doesn’t physically know how much liquid is left. It just makes a guess based on how long you’ve used it. Therefore, I wouldn’t rely too heavily on the app to provide accurate scent levels.

Instead, you can pull the cover off and physically inspect the vial to see how much oil is left.

How big of a room does it cover?

In addition to having generally pleasing scents, the Pura device is good at dispersing them fairly evenly. You can adjust the intensity of the scent (1-10) using the app to fit the room size and your personal preference. At the right intensity, it has the ability to fill a small to medium sized room with scent, yet it doesn’t overwhelm you when you’re close to the device.

In my experience, the Pura diffuser works best in small, enclosed rooms such as bathrooms or bedrooms. I’ve found that the scent takes about 10-15 minutes to “fill” a medium sized room at a “5” intensity level.

Large, open rooms like kitchens or living rooms don’t seem to work very well. You can turn up the intensity to “10”, but when you do, you tend to get a much more intense smell near the device, but it quickly fades as you move a few steps away from it.

Much like other popular scent diffusers, the compact Pura diffuser plugs into any outlet and uses the outlet as a perch to hang from the wall. This both eliminates the need for a cord, and stops the Pura from taking up precious counter space.

The cover is stuck on using magnets. A gentle pull removes the cover and exposes the scent bottles.

When you install a new scent, you’ll be prompted by the app to enter the code located on the bottle. This lets the app know what smell you just loaded so that it can display a fancy picture of it in your app’s dashboard.

Once the scent bottles are open and loaded in the Pura, make sure the diffuser stays upright at all times. If you set it on its side, the liquid oils will run out and make a mess.

Does this mean you can’t plug the Pura into a horizontal outlet? No. The electrical plug on the Pura diffuser rotates so that you can orient the Pura in the upright position regardless of the orientation of the outlet.

The Pura holds two scent bottles so you can regularly and easily switch between two scents.

Some people may want to try turning both scents on at the same time, but you can’t. If you turn on one scent while the other is already on, it will automatically shut the other off.

However, you can create separate schedules for each scent. For example, you may have a scent for the morning and a different scent for the evening. Or maybe you just want to switch it up from day to day. Either way, it’s nice to be able to mix it up so you don’t experience scent fatigue.

Scheduling is a breeze

You can use the app to create a weekly schedule for when the Pura will turn on/off. The schedule is useful, and definitely the best way to control the Pura scents.

You can create a separate schedule for each fragrance. For each schedule entry, you choose days of the week, an “on” time, “off” time, and intensity level. You can also choose whether to turn the night light on/off during that period and what color the light should be.

I’ve been using it for several months with my schedule set to turn on every evening at 6pm and turn off at 9pm. It seems to work correctly most days. However, every once in a while, it turns on randomly without any input from me. Apparently I’m not the only one with this problem. I skimmed through some Amazon reviews and saw multiple other people reporting the same issue.

One other fragrance-saving smart feature is the auto-away feature. The Pura can use the location of your phone to turn your scents off when you’re not home.

The Pura Smart Diffuser doesn’t work with Alexa or any other voice assistant at this time.

This was really disappointing to me because when I did my initial research, I saw reviews indicating it DID support Alexa.

They must have been old reviews because further investigation revealed they did have an Alexa skill at one point, but it’s no longer active. Judging by the angry reviews and the fact that the skill is currently unavailable, it must not have worked very well. Hopefully, the Pura team can get it resurrected and working well at some point in the future, because it’s kind of a pain to use without it (see below).

Once you have a schedule set up, it eliminates most of the need to manually turn the diffuser on or off. However, there are still random times when you might want to deviate from your schedule.

Normally, for those random times my preferred method would be to use an Alexa voice command. Of course, as I just stated above, that’s not possible here.

Usually, the next action would be to give in and manually press the physical on/off button on the device. Except in this case, there isn’t one!

The only option you have with Pura is to use the app to turn it on/off. This is my absolute most hated way to control any smart device.

There have been multiple instances when I am literally standing right in front of the device wanting to turn it on/off but I can’t because I don’t have my phone on me.

The most important part of a fragrance diffuser is the fragrance, and Pura does a great job in that department. Every fragrance I’ve used produces a long lasting, but not overpowering scent. The smells somehow manage to be rich and full without seeming fake and “perfumey”.

For me, the biggest “miss” of the Pura smart diffuser is the lack of any voice assistant integration. That combined with the lack of a physical on/off button makes using the device inconvenient at times. If the people at Pura can manage to get their Alexa integration working again, I would happily buy more.