To me, the idea of having to manually reach up and pull the pull-chain on a ceiling fan is as awful as having to manually lift up your garage door. So, if you’re like me and you’re addicted to everything smart home, you probably have a need to add smart control to any ceiling fans in your home.

Unfortunately, its not always practical to just toss out your old fans and replace them with brand new smart fans.

The smart ceiling fan controllers that work best for you will depend on the answers to the following questions:

1. Does your ceiling fan have a remote?

If YES, I recommend the Bond Bridge. Bond requires zero wiring and works with multiple fans.

If NO, continue to question 2.

2. Do you have an AC or DC ceiling fan motor?

If you have a DC fan motor, the only option on this list that might work is the Bond Bridge (to work with Bond, your ceiling fan must have a remote).

If you have an AC fan motor, continue to question 3.

3. Can you currently control both the light and fan from the wall switch(es)?

If YES, you can use any of the controllers on this list. I recommend the following:

Lutron for an extremely reliable, but more expensive option.

If NO, continue to question 4.

4. Do you want smart control for both fan and light?

If YES, then you’ll need to install a module in the fan canopy. I recommend the following:

Bond Bridge + Remote kit if you have multiple fans.

If NO, I’ll assume you have a fan without a light fixture so all you need is a smart fan controller. I recommend the following:

Leviton for low cost and no additional hub.

Lutron for an extremely reliable, but more expensive option.

Enbrighten Z-Wave Plus smart fan speed control if you already have a Z-Wave hub.

Aubric WiFi Fan Switch if you don’t currently have a wall switch.

WARNING: DON’T try to use a dimmer switch as a fan speed control.

A smart dimmer switch should not be used as a fan speed control. I know intuitively it seems like it would work, but it’s not a good idea.

A typical ceiling fan motor is an AC induction motor. For a dimmer switch to effectively slow down that type of motor, it requires a variable frequency drive (VFD) or a TRIAC.

If you try using a light dimmer switch on your fan, you will most likely hear a loud humming sound on low speeds. Even worse, the ceiling fan motor could be damaged.

INSTALLATION TIP FOR FAN CONTROLLERS: Set your fan to its highest speed before you disconnect your existing switch. That way, there’s no question that the fan is set to its top speed when you turn the power back on and test your smart fan speed controller. 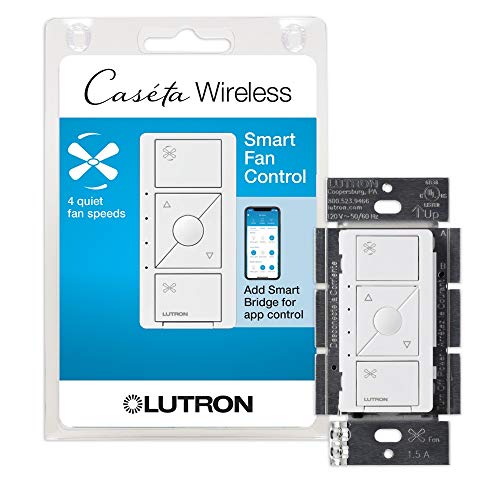 Another great option for a fan controller is the Lutron Caseta Smart Fan Speed Control. Lutron is very high quality and reliable equipment. It also offers the ability to easily integrate 3-way switching by using a Lutron Pico remote.

However, Lutron is a little more expensive. It runs on it’s own wireless protocol so it requires the Lutron bridge. Plus, if you want to control a fan and light, you’ll need to buy both a fan speed control and a light dimmer.

Because of the extra cost of the hub, it doesn’t make much sense to go with Lutron if all you want to automate is a single ceiling fan. However, if you also want a super reliable solution for automating other light switches and even shades, then it’s hard to go wrong with Lutron (see my review). If you want to get started with Lutron switches, I recommend buying a starter pack. 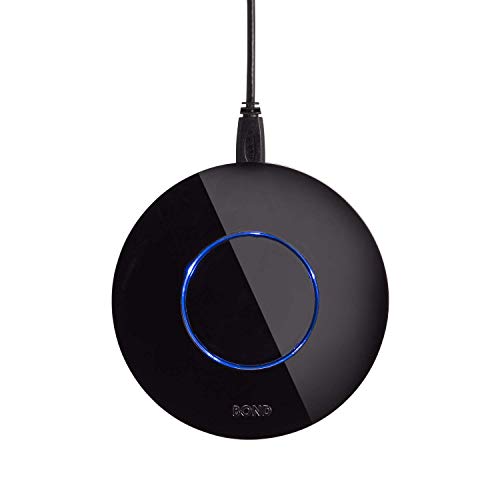 The Bond Bridge can record the signals that your remote control sends. Once the signal is recorded, it remembers and plays it back whenever you (or your smart home) command it to. The ceiling fan then responds to Bond exactly as it would respond to your remote control.

Bond can record and play back any function that your remote can control. Usually that includes light dimming and fan speed.

Once your ceiling fan is connected to Bond, it’s easy to setup voice control with Amazon Alexa or Google Assistant.

Bond can be placed pretty much anywhere in your home. The RF signal used by most ceiling fans easily goes through standard walls and has a range of roughly 40 feet. It also needs to be within WiFi range of your home router.

Bond is fairly expensive if you only plan on using it with one ceiling fan. But, a single Bond Bridge can be used to control up to 30 devices so the “price per device” can be much lower.

Also, its mostly being marketed as a ceiling fan controller, but its not limited to only ceiling fans. It can control any device that uses an RF signal (learn more).

The best part about using a WiFi ceiling fan control like Bond is that there is no wiring. So, if the idea of digging into your wall switches with a screwdriver makes you a little nervous, this may be a great option for you.

Can I Still Use Bond If My Ceiling Fan Doesn’t Have A Remote?

No, but if your old ceiling fan is not set up for remote control, you can buy a universal remote control kit made specifically for ceiling fans. The kits come with a receiver unit that installs inside the housing of your fan and a remote.

To install a remote control kit, you’ll need to open the fan housing and do some wiring. But, once the kit is installed, you’ll be all set to use Bond.

There are multiple kits available on Amazon from many different brands, and just about any will work.

I found this remote unit from Westinghouse. It’s one of the more expensive kits, but instead of a typical remote control, the remote unit is wired into the wall and replaces an existing switch. Therefore, you won’t ever have to worry about replacing the remote batteries and you won’t ever lose the remote. Plus, it eliminates the problem of someone turning the existing switch off and cutting all power to the fan (which means no smart control until power is restored).

Whichever one you choose, check the dimensions of the receiver and make sure it will fit inside your fan’s housing.

I’m a big fan of Inovelli. I’ve been using their switches for a couple years and I can say with confidence that their Red Series products are basically smart switches on steroids (see review). The Inovelli Red Series fan and light switch is no different.

To use the Inovelli switch, you will need a Z-Wave hub like SmartThings or Hubitat. And, to use any of the advanced features, there’s a bit of a learning curve. However, once you get it figured out, you can activate custom routines by utilizing multiple taps and create custom notifications via multi-colored LED strips on the switch. 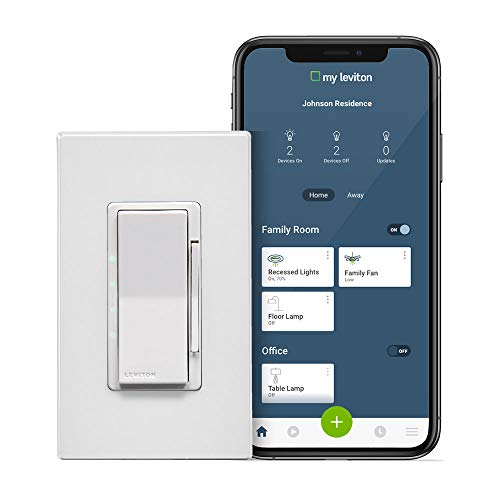 The Leviton fan speed controller offers a clean look from a trusted brand. It uses WiFi which makes for a simple, “hub free” setup. Plus, the companion dimmer option allows for easy 3-way switching.

If you also want to control a light, you’ll want the separate Leviton smart dimmer.

The Leviton WiFi switches are a good all around option for entry level to intermediate home automation. 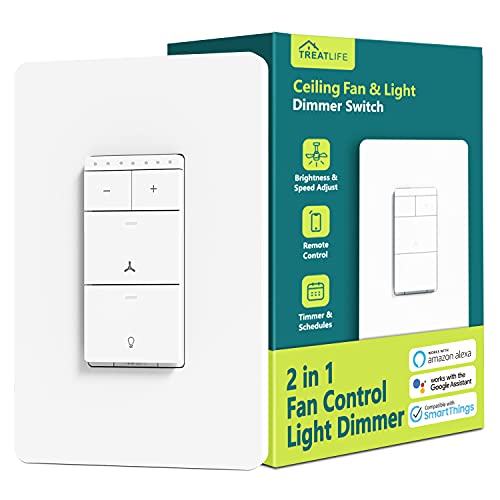 There is a lot to like about this TreatLife Ceiling Fan & Light Dimmer Switch. If you’re looking for a low cost, easy to install, all-in-one fan/light control, this is hard to beat.

It uses WiFi, so there’s no additional hub. It squeezes both a fan speed control and a light dimmer switch into a single gang. Plus, it’s one of the lowest priced options on this list.

To control both fan and light, you will need load wires for both the light and fan in the switch box.

Because it’s both a fan control and light dimmer, the switch is pretty big. Therefore, if you plan on installing it in a box that’s already stuffed with wires, be prepared for a struggle. 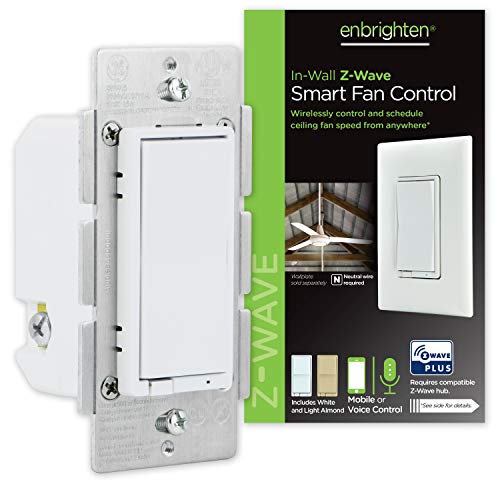 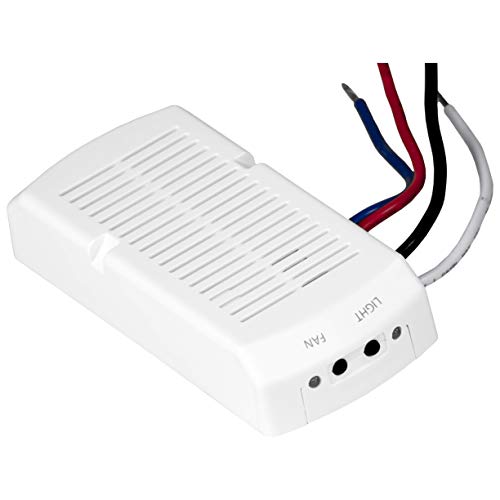 The Insteon FanLinc controller controls both fan speed and light dimming in one convenient box which installs in your ceiling fan’s canopy.

However, the controller uses the proprietary Insteon protocol to communicate. That means you’ll need an Insteon hub for it to work. There’s nothing wrong with Insteon, but if you’ve already started building your smart home and it’s not Insteon, then this probably isn’t a very good option for you.

Also, since the FanLinc controller is installed inside the fan housing, you’ll have to make sure any wall switches stay turned on for the controller to work. The best way to do this is to stick with the Insteon system and replace the current wall switches with an Insteon Keypad. 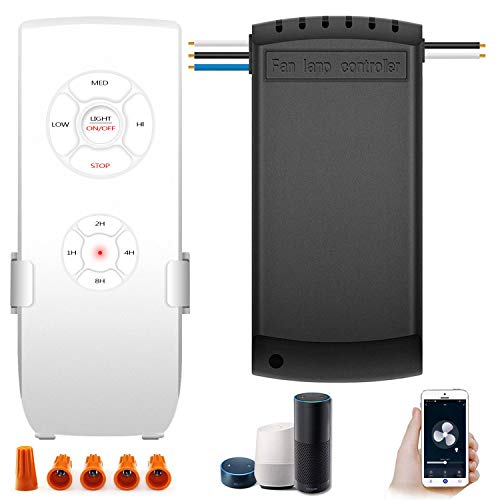 This Aubric WiFi Fan Switch consists of a WiFi controller that installs in the fan canopy and comes with a remote for manual control. The WiFi controller connects to your smart home via the Smart Life app and allows you to control fan speed and light on/off (no dimming).

If you happen to have a fan without any wall switches (pull chain control only), this is the perfect low-cost option to eliminate the need for those pull chains.

There are several brands selling these controllers which use basically the exact same hardware. I prefer to stick to a brand with lots of good reviews. That way, if you get a faulty unit (which will happen from time to time), you can be reasonably sure they’ll make it right without too much hassle.

If your fan already has a remote, the Bond Bridge is best for someone that wants an easy install and reliable basic automation. It offers a quick and tool-less setup (No wiring!), voice control, and IFTTT compatibility. It’s perfect for the person that wants to do a little home automation, but doesn’t want to get too deep into any programming. Plus, the price per fan is quite low if you’re using it with multiple fans.

62 thoughts on “Say Goodbye To Pull-Chains: 8 Ways To Add Smart Control To Your Old Ceiling Fan”